Recently we launched a revamped website, which you can find at the same URL as before: www.lincolncottage.org. The new site combines the dynamic content of this blog, with our previous informational website in a sleek new design. Though we don’t plan on shutting down this blog, all new content will be directly posted on the website.

The new website is divided into three main sections: Explore, Visit and Connect. A level down,History, Exhibits, Multimedia, Public Programs and Newsroom are among several blog-style pages that provide fresh content. (In addition we have standard pages on Plan a Visit, Education, Support and of course Tickets.)

As always, please feel free to contact us to ask any questions or share your thoughts on our online prescence via commentating on our website, posting to social media, emailing us at LincolnsCottage@savingplaces.org, or calling us at 202-829-0436.

Readers of our blog:

You might be wondering why we haven’t posted much to this blog recently (our newsletter notwithstanding). It’s not because there hasn’t been plenty of Lincoln news and anniversaries. Instead, we have something exciting to announce (in addition to the fact that a copy of the Emancipation Proclamation signed by Lincoln is going to be on display in the Cottage from September 22 until February 2013!!!)

For the last two months we’ve been undertaking a complete redesign of our website, www.lincolncottage.org. The  website combines all of the wonderful content dozens of staff members have written for this blog, with a refreshing, sleek look that is easily navigable. The result is a brand-new website that will make it even easier to: explore detailed information about the history of the Cottage, plan a visit to Lincoln’s summer retreat, and connect with us to make your President Lincoln’s Cottage experience even more meaningful. (Once the site is fully live and navigable, we’re going to shut down this blog since the current site will be routinely updated with press releases, new research, event announcements and a whole lot more.)

We’re in the middle of launching the revitalized website, with the same address of http://www.lincolncottage.org. So stay tuned and bear with us as we start an exciting new chapter of President Lincoln’s Cottage’s online experience.

If you have any questions, please contact us at LCottage@savingplaces.org. Thanks!

We’re looking forward to the imminent launch of our new website (still located at the same great place: http://www.lincolncottage.org). In the meantime, take a look at the articles from the Summer 2012 edition of The Cottage Courier. Click here to download a PDF of the newsletter  or browse the posts below to read:

Letter from the Director

On this page, view the Letter from the Director. To download a full PDF of The Cottage Courier, click here.

On this page, view the Cottage’s programming around the Emancipation Proclamation and our new Special Event site rental packages. To download a PDF of The Cottage Courier, click here.

Can You Walk Away? and 1st Annual Family Day

On this page, learn about our upcoming Family Day program and read former First Lady Laura Bush’s review of our special exhibit, Can You Walk Away? To download a full PDF of The Cottage Courier, click here. 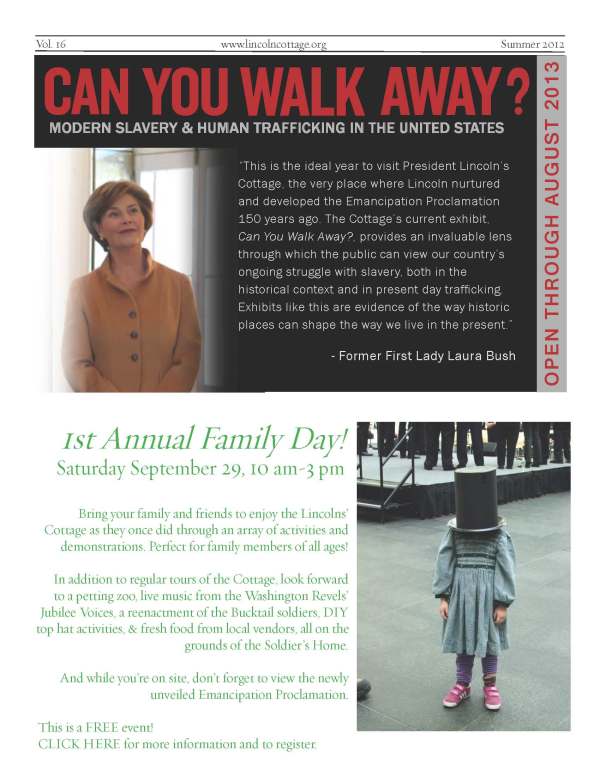 On this page, learn about our school programs and view the schedule for the 2012-2013 season of Cottage Conversations. To download a full PDF of The Cottage Courier, click here. 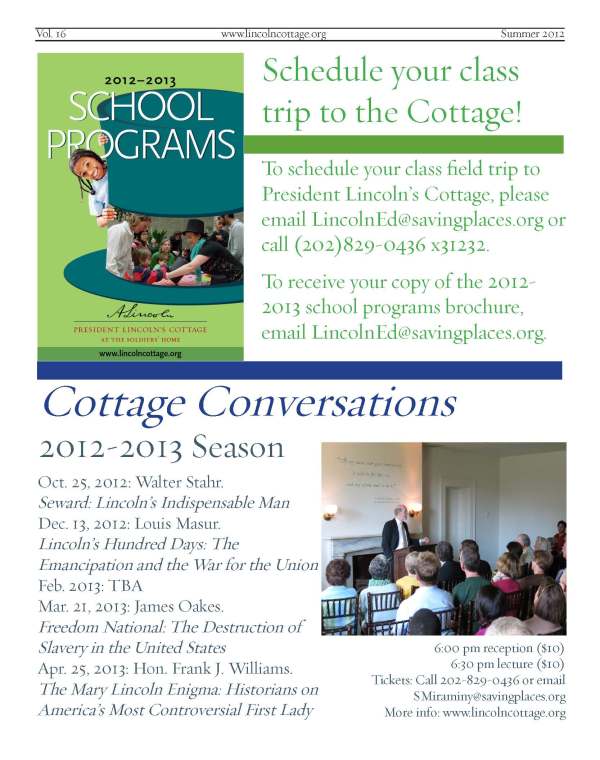 On this page, learn about the latest grants the Cottage has received and view the homepage of the new President Lincoln’s Cottage website. To download a full PDF of The Cottage Courier, click here.

Lincoln and the 1862 Minnesota Sioux Trials

Read Burrus M. Carnahan’s article on Lincoln and the 1862 Minnesota Sioux trials in this post. To download a full PDF of The Cottage Courier, click here.

Lincoln and the 1862 Minnesota Sioux Trials: Page One 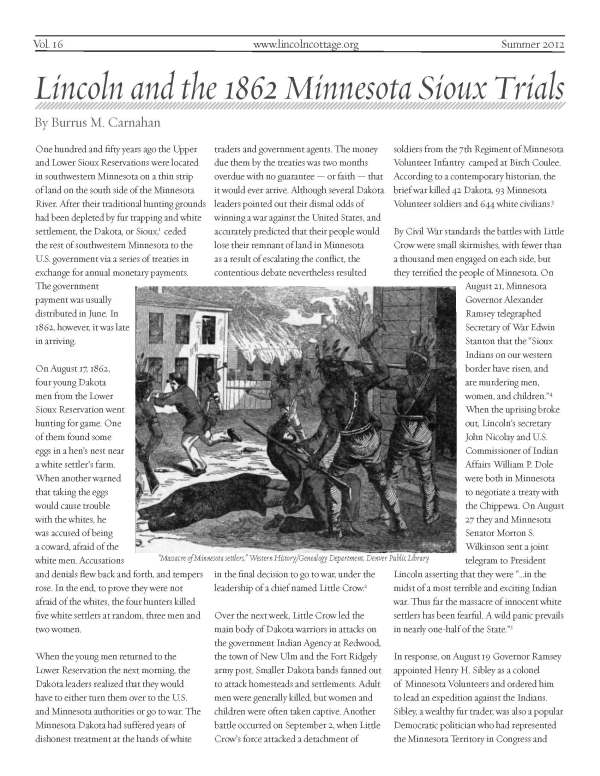 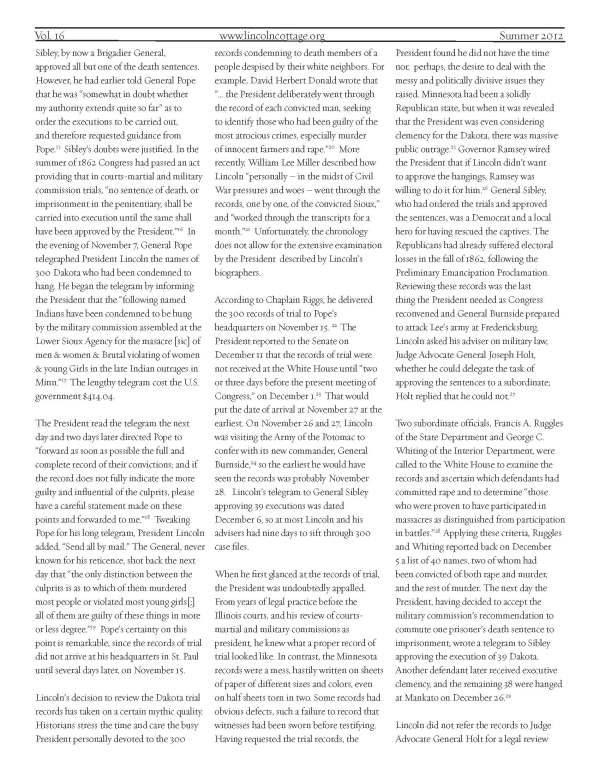 The First Reading of The Emancipation Proclamation: July 22nd, 1862

As we move through the sesquicentennial of the Civil War, 2012 has already seen the anniversary of the bloodbath at Shiloh, and of the meat-grinder known as the Seven Days Battles. This fall, Antietam and Fredericksburg will effect commemorations worthy of the soldiers who fought and died there 150 years ago. Inextricably linked to the events at Antietam and Fredericksburg will be the commemoration of Emancipation, as Antietam provided the victory Lincoln needed to announce his proclamation to the public, while the disaster at Fredericksburg led many to wonder if Lincoln would follow through with his redefinition of the war. Amid all the celebration and thoughtful reflection, the anniversary of Lincoln’s first reading of the Emancipation Proclamation to his cabinet on July 22nd should not be overlooked. Although it marked neither the beginning, nor the end, of a profound revolution in American society, it was nonetheless a critical moment in the translation of slave agency into federal emancipation policy.

As we pause to remember what this mid-summer moment meant for the slaves still toiling on Southern fields, for the soldiers who would provide much of the Emancipations Proclamation enforcement, and for generations who struggled with the meaning of freedom in the war of the Civil War, let us also reflect on why Soldier’s Home proved so critical to the Emancipation saga. Gaining a respite from the crush of office seekers and social obligations of the White House, while enjoying the cool hillside breezes gave Lincoln the opportunity during those critical summer months of 1862 to fully consider the breadth, scope, and ultimately, the entire meaning of the Union war effort. Consequently, as you (hopefully) visit our site this weekend, this summer, or even this year, take a moment to picture Lincoln wandering these same rooms and grounds exactly 150 years ago, contemplating and crafting a document that would change the nature of the Union war effort, and ultimately, the nation as a whole.

Mr. Ackerman is a Historical Interpreter at President Lincoln’s Cottage.